Child-initiated play without a huge mess

An early years teacher shared her struggle with child-initiated play and tidying up after that on a forum.

“We have long periods of child initiated, but my classroom is always a mess! The children get stuff out but never put it away once they’ve played with it so tidy up time is manic! I’ve got things labelled, and there are open baskets, so they can ‘see what is in them’. I am constantly tripping over stuff, and they are treading on a lot of things but just don’t seem to care. At the moment, we have very ‘basic’ stuff out because of this. Am I missing a trick somewhere?”

I think it is a common problem for both teachers and parents so I would like to address this issue and give you some hands-on tips.

I remember, when I first started to work in a nursery, I was dreading the tidy up time… I didn’t know how to teach children to tidy up and when they began to play, I could see how it will possibly end: with an incredible mess and crying.

Later on, I’ve learnt some effective tactics from my fantastic colleagues that I would like to share with you now.

How to keep child-initiated play under control and how to teach children to take care of their toys?

My opinion is, that we need to help our children understand why they need to put away the toys and why they should take care of them, plus we need to show them how. Children before the age of 3 might not fully understand the concept of it, but we still need to remind them and show good examples. Let’s make playtime a fun time for us as well!

Taking care of the environment and toys

Children learn a lot by copying you (and others), so be aware of your actions. Try to show a good example by taking care of your environment such as by cleaning, tidying up or gardening, and using tools and other things appropriately and show appreciation towards the things you have.

During playtime (taking care of toys).

When you see the children playing rough with the toys, or they don’t use them properly, just go and tell them/show them how to do it and explain them why and what the consequences will be, for example, the toy will be broken, and they won’t be able to use it after that. If it is possible, ask them to fix the toy.

Taking care of the environment.

If you see the children causing some kind of damage to the environment, for example, they draw on the wall, explain to them why they shouldn’t do such thing and ask them to remove the drawing (help them if it is necessary).

By showing a good example, giving explanations and asking children to take responsibility will help them to understand the concept of taking care of the environment and toys so that any type of play will go smoother and children will be more and more independent.

How to keep child-initiated play organised with toddlers?

Child-initiated or child-led play has lots of benefits and experts say that it should be implemented into the daily routine of every nursery. A child-initiated play is when children decide what to, where to and how to play without the interruption of adults. Through this type of play, children develop and improve skills such as social, physical, communication and problem-solving skills.

Start it as early as possible

Let your children lead and play by themselves sometimes, so that they will learn as many things as they can at an early age such as taking care of and adapting to their environment, respecting others’ opinion and getting more confident.

What can you do?

Keep it under control.

If you teach your child to take care of the environment and his toys, he will be more likely to do the same when he plays freely with his peers. When it comes to child-initiated play, observe the children and “interrupt” them when it is needed, for example when they are about to hurt themselves or others or when they don’t know how to play with certain toys and use certain tools. Also, you can keep it under control by…

Setting up some rules.

Even if it is a child-initiated play, you can set up some rules before the fun begins (especially for little children). Be clear and tell children what you expect from them, for example:

Either way, you prepare and have child-initiated play in your setting, the key here is to help children understand why taking care of toys and the environment is important and what are the benefits of tidying up. Also, of course as always, show a good example and tell the children how long they can play and what will happen when you say, ‘Tidy up time’. 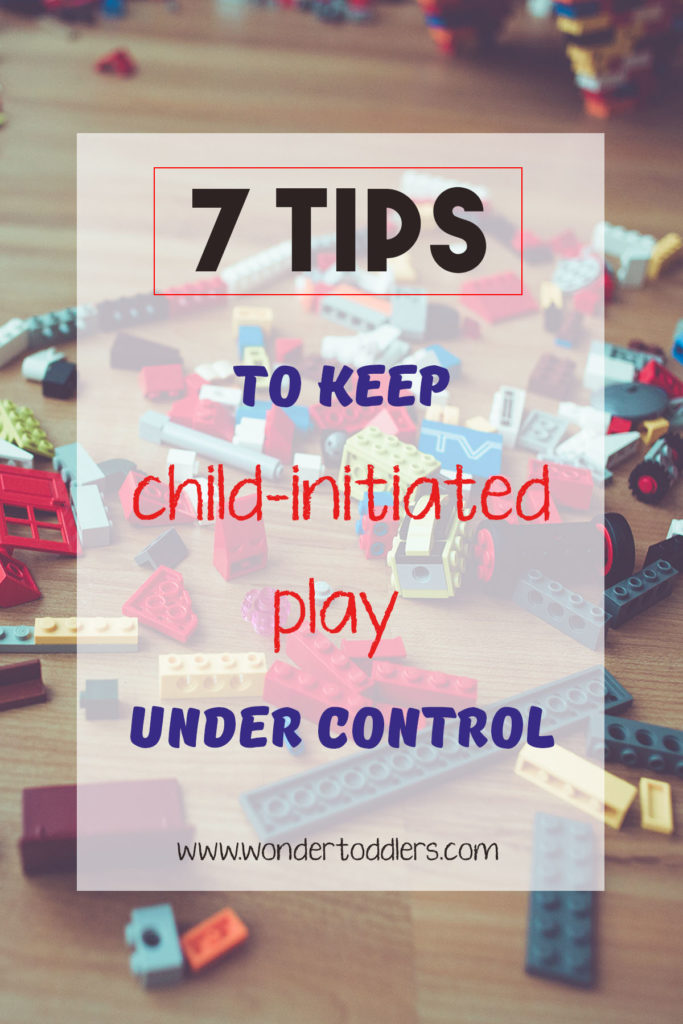 Eva
Hi, it's Eva and I am an Early Years and Parenting Consultant. Here, I am sharing my knowledge about child development and experience in teaching. Have a look around and follow me on SNS to keep in touch!
Previous articleWhat to do if your toddler refuses the toilet at the nursery?
Next articleHow to manage aggressive toddler behaviour

How to prevent biting, kicking and hitting? : Toddler tantrum Ep.2

In our previous episode we talked about why toddlers can get aggressive sometimes and in this episode, I will give you some tips on...
Read more
Education and Learning

How to stay calm and improve your self-control Ep. 1

When you are losing it... Staying calm with your toddler in stressful situations, especially when you have a lot of things going on already, is...
Read more
Education and Learning

Should you take your children to (summer) phonics workshops?

Are phonics workshops beneficial to children or a total waste of time? A recent advertisement about a phonics summer camp has sparked a heated debate...
Read more
My Reaction to

To Make Progress In Your Parenting

Today morning, as usual, I was checking my emails and social media accounts. Most of the time, I find something hilarious such as crazy...
Read more
Education and Learning

5 Valentine's Day Activities For Toddlers Heart Thumbprint Craft This activity is super easy and doesn't need much preparation. To paint the paper, they can use their...
Read more

To Make Progress In Your Parenting

Today morning, as usual, I was checking my emails and social media accounts. Most of the time, I find something hilarious such as crazy...
Read more
My Reaction to

The best parts of having children?

What are the best parts of having children? I was browsing on Mumsnet Talk and came across with this message from a mother to be: Most...
Read more
My Reaction to

4 reasons to visit the Childcare Expo

Teach reception children how to grip a pencil, says Ofsted

Teach reception children how to grip a pencil, says OFSTED The pressure on reception teachers I read a BBC article the other day, which was about...
Read more